ISKCON is comprised of more than 350 centres, 60 rural communities, 50 schools and 60 restaurants worldwide.

Our founder Acharya is His Divine Grace A.C. Bhaktivedanta Swami Prabhupada. “Acharya” means one who teaches by example and Srila Prabhupada certainly fulfilled this meaning. He personally trained his disciples in Vedic religion (Sanatana Dharma-Eternal Religion) and inspired them as well as hundreds of thousands of people to follow Krishna Consciousness. To this day, Srila Prabhupada continues to be an inspiration.

Srila Prabhupada gave a clear mission statement for ISKCON which is outlined in the following seven points. 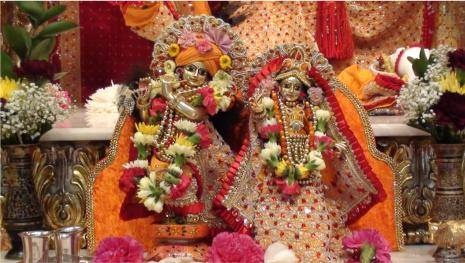 
Krishna Who is known as Govinda is the Supreme Godhead. He has an eternal blissful spiritual body. He is the origin of all. He has no other origin and He is the prime cause of all causes. (BS 5.1)

Bhagavad Gita (Song of God) was spoken by Lord Krsna to Arjuna in the midst of the battlefield of Kuruksetra on the onset of the Mahabharata. When Arjuna asked Krsna (who agreed to be Arjuna’s charioteer) to take the chariot to the middle of the armies to take a closer look, he became overwhelmed with sadness, fear and questions and unable to compose himself, he put his Gandiva bow down, forgetting his duty as a ksatriya.

After seeing Arjuna’s condition, Lord Krsna reveals to Arjuna the confidential knowledge of Bhagavad-Gita, reminding him of his duty to protect dharma. 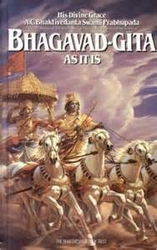 The mission of merciful and empowered souls when they descend on earth is to take pity on the living entities who are suffering in this material world and guide them back to their original home, back to Godhead where they can be eternally happy.

Such is the case of Srila Prabhupada, who at the age of 69 and carrying out the orders of his spiritual master, came to America in 1965 aboard of the cargo ship Jaladutta and in July of 1966, he established the International Society for Krishna Consciousness.

Srila Prabhupada was born in Calcutta (Kolkata), India in 1896 in a Vaisnava family. In 1922, he met his spiritual master, Srila Bhaktisiddhanta Saraswati Goswami, who instructed him to devote his life to teaching Vedic knowledge, to preach Lord Caitanya Mahaprabhu’s message to the English speaking world.

In 1959, he took sannyasa, the renouced order of life and at the Radha-Damodara temple started the translation and commentary of Srimad-Bhagavatam in English. 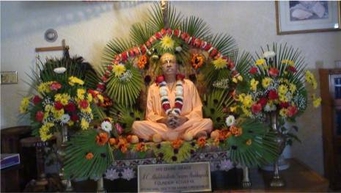 He instructed his disciples to follow in his footsteps and to continue preaching and spreading Krishna Consciousness all over the world.

Before his departure in 1977, he established 108 temples around the world, wrote sixty volumes of transcendental literature including: Bhagavad-Gita As It Is, Srimad Bhagavatam, Caitanya Caritamrita, Nectar of Instruction, Sri Isopanisad, Teachings of Lord Kapila, Teachings of Queen Kunti and many other books. He initiated 5,000 disciples worldwide, founded the International Society for Krishna Consciousness, the Bhaktivedanta Book Trust, began a scientific academy (The Bhaktivedanta Institute) and other trusts related to ISKCON.

He wanted to create Spiritual Embassies where everyone would come and take shelter of Krishna, escaping the veil of Maya and to engage in the service of Krishna, to develop devotional service and love of God, Krishna-Prema.

To know more about our founder acharya, please visit http://www.vedabase.com/en/spl “We are trying to give people that happiness which will never be exhausted. That is our objective of happiness”. Srila Prabhupada

Lord Caitanya Mahaprabhu appeared in Navadwipa (Mayapur) West Bengal, India 500 years ago and He is the combined form of Srimati Radharani and Krishna. He appeared in this form to experience the love of a devotee and to teach by example how to surrender to Krishna.

In different purports by Srila Prabhupada of Srimad Bhagavatam writes that “Lord Caitanya is Krishna Himself in the garb of a devotee of Krishna, and therefore the versions of both Lord Krishna and Sri Krishna Caitanya are identical. Lord Caitanya, therefore, should not be considered one of us. He is Krishna Himself, the supreme living entity and as such He nevers comes under the cloud of maya”

Caitanya Caritamrita confirms that in order to study Radharani, Krishna lived in Her role and tried to understand Himself. This is the secret of Lord Caitanya’s incarnation. Sri Caitanya Mahaprabhu is Krishna, but He has taken the mood and role of Radharani to show us how to love Krishna. Lord Caitanya’s teachings begin from the point of surrender to Krishna.

I offer my obeisances unto the Supreme Lord Krishna, who is non-different from His features as a devotee, devotional incarnation, devotional manifestation, pure devotee and devotional energy. CC.Adi.1.14 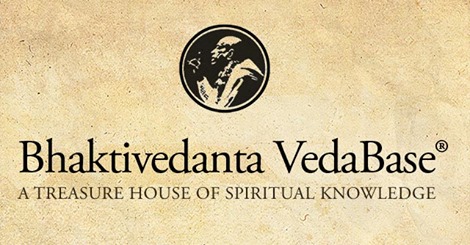 When we chant the Hare Krishna Maha-mantra, we are addressing the energy of the Lord (Radha=Hara) to engage us in the service of the Lord. Krishna is the Energetic and Radha is His Energy. Energy and Energetic can never be separated. Chant and be happy!