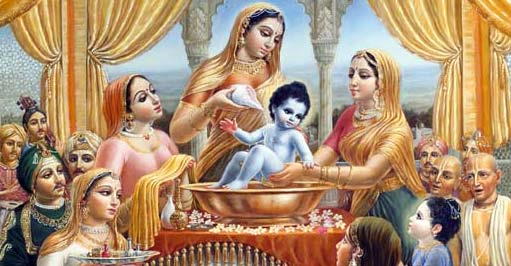 Srimati Radharani is the eternal consort of Lord Krishna. Five thousand years ago, when Lord Krishna came to this planet to perform His pastimes, Srimati Radharani also appeared. This year we celebrate her appearance on September 22nd. This special day is known as Radhashtami. On this day only, one may take darshan of Srimati Radharani’s lotus feet, which are covered on all other days. The day of Radhastami is spent by the devotees in reading the transcendental pastimes of Radharani and her Gopi friends, and her lila pastimes in the groves of Vrndavana with Krsna.

The following is adapted from a lecture by His Holiness Varshana Swami:

“On a half-moon night in the month of Bhadra, King Vrishabhanu came to the Jamuna to bathe and found himself engulfed in a golden aura, the golden aura of pure love. It was emanating from a lotus, which had a baby girl standing on its whorl. When the king returned to the palace with the baby, Queen Kirtida was delighted. She was also shocked that the girl was blind.

“Lord Krishna’s mother, Yashoda, heard that her best friend Kirtida had a baby, so she came to visit along with her husband and her son. Krishna crawled up to the cradle and pulled Himself up and looked in. At that moment, Srimati Radharani’s eyes fluttered and opened wide and blossomed like lotuses. It seems that she did not want to see anything of this world, only the form of Sri Krishna. Everyone was delighted.

“Srimati Radharani is the mother of the universe, the spiritual mother of all souls. And the concept of mother is the most sacred symbol – that of purity, selflessness, caring, sharing, nurturing, and love. That is why our sacred mantra is the holy names. It is the holy names in the vocative. Hare Krishna, Hare Krishna, Krishna Krishna, Hare Hare / Hare Rama, Hare Rama, Rama Rama, Hare Hare