Lord Jagannatha is the Lord of the Universe, so everyone is welcome to participate. Join the celebrations!Love Him, serve Him, and share His greatness with others,

The first time that the Ratha-Yatra Festival was celebrated outside India, was by the International Society for Krishna Consciousness (ISKCON) in 1967 in San Francisco, California, under the supervision and blessings of our founder-acarya, His Divine Grace A.C. Bhaktivedanta Swami Prabhupada.
The Lord is known by His various names according to His different Lilas (pastimes), Lord Jagannatha is the Lord of the Universe and has a very particular form, some people think that this form is “incomplete” but, is it? The Lord IS complete, He is Purusottam, He is sac-cid-ananda (full of eternity, knowledge and bliss), He is the Absolute Truth.  So, why this form? Well, this is another pastime of The Lord to help us remember Him and worship Him.
Once, the Queens of Dwarka requested mother Rohini to share the pastimes of Krishna in Vrindavan, they wanted to relish those nectarian stories. She agreed with the condition that Krishna and Balaram would not be in attendance, so she asked Devi Subhadra (Lord Krishna and Lord Balarama's sister) to guard the door and inform if her brothers would come.
But when mother Rohini was describing the wonderful pastimes of Lord Krishna, Devi Subhadra got so absorbed in the narration, that she did not notice that Krishna and Balaram were standing right next to her. The three of Them were in such ecstatic frame, that Their lotus eyes widen, Their smile reflected Their unparalleled happiness and Their arms retracted just as a person experiences an instant shock. So, this pastime was forever carved in His Daru-Brahma form.
On Ratha-Yatra day, the Lord of the Universe comes out of His temple accompanied by His brother Lord Balaram and His sister, Devi Subhadra. They ride on chariots pulled by devotees and anyone who would want to participate. The merciful Lord gives His darshan and the opportunity to serve to everyone.   The Lord is pleased when He sees His devotees sharing the good fortune with others. Join us! 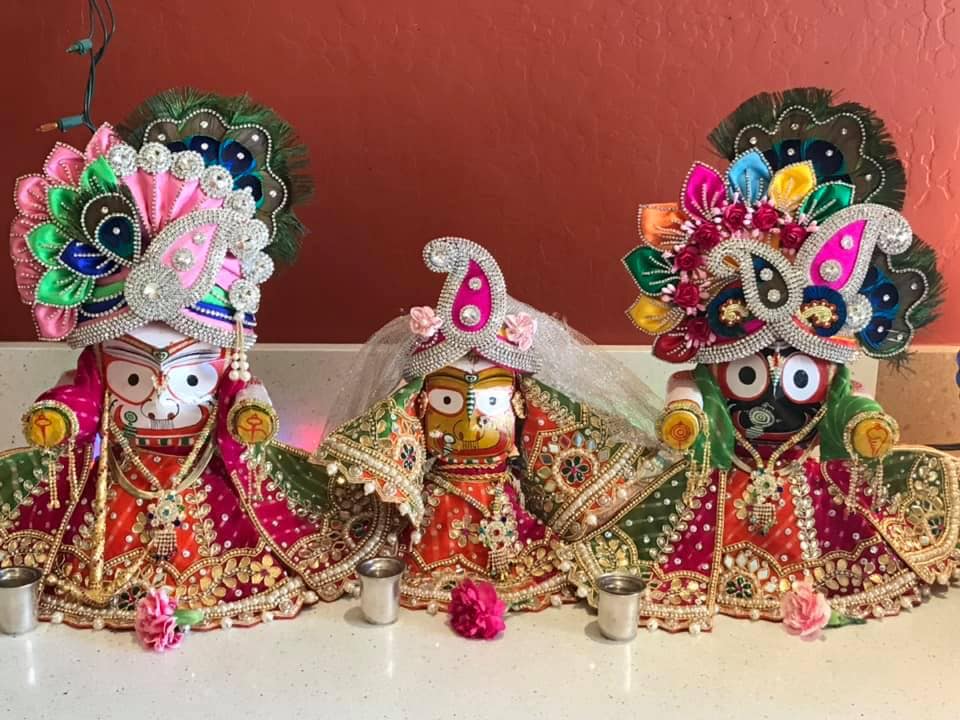